• In pictures – top 10 most unique and endangered birds 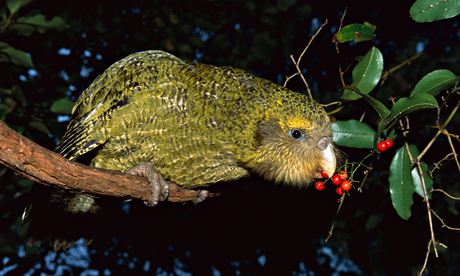 At number four on the list is the kakapo (Strigops habroptila), a nocturnal, flightless parrot. Photograph: Tui De Roy/Corbis

The “little dodo”, a flightless parrot and the world’s largest ibis are among the world’s 100 most unique and endangered birds, according to a new study.

Scientists from the Zoological Society of London (ZSL) and Yale University assessed the world’s 9,993 bird species according to their evolutionary distinctiveness and global extinction risk to produce a list of the world’s 100 most Evolutionarily Distinct and Globally Endangered (Edge) species.

Topping the list is the rare and striking giant ibis (Thaumatibis gigantea) – the world’s largest ibis weighing in at 4.2kg and reaching more than one metre in height. With only 230 pairs estimated to remain in the wild, it is a critically endangered species. Habitat loss, human disturbance and hunting have reduced its range to an extremely small, declining population concentrated in Cambodia.

At number four on the list is the kakapo (Strigops habroptila), a nocturnal parrot that has evolved to be flightless due to the historic absence of mammalian predators in its New Zealand habitat. Hunting, the introduction of predators, forest clearance and habitat degradation have caused a catastrophic decline in numbers. It is now extinct in its natural range, and survives only on three small, intensively managed islands after being relocated. Dedicated conservation efforts have increased the population to 125 individuals. 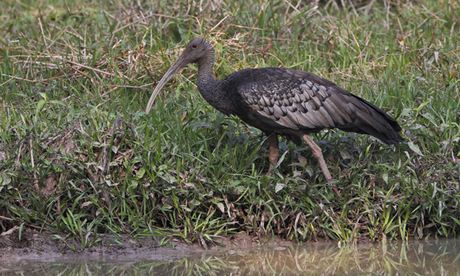 The giant ibis, Thaumatibis gigantea, which lives in Cambodia, is the world’s most unique and endangered bird. Photograph: FLPA/AlamyAt number 34 on the list is the tooth-billed pigeon (Didunculus strigirostris), also known as the “little dodo” and found only on the island of Samoa. With less than 250 adults estimated to survive in the wold, conservationists say urgent action is needed to prevent the species from meeting the same fate as its closest relative, the dodo. Loss of its forest habitat to agriculture and cyclones, hunting and invasive species are the greatest threats to this bird.

Half of the 100 highest ranked Edge bird species are receiving little or no conservation attention, the study warned. Carly Waterman, Edge programme manager at ZSL, said: “We lament the extinction of the dodo, but without action we stand to lose one of its closest relatives, the tooth-billed pigeon or ‘little dodo’, and many other extraordinary birds.

“The release of the Edge birds list enables us to prioritise our conservation efforts in the face of a mounting list of endangered species. These one-of-a-kind birds illustrate the incredible diversity that exists in our natural world.” 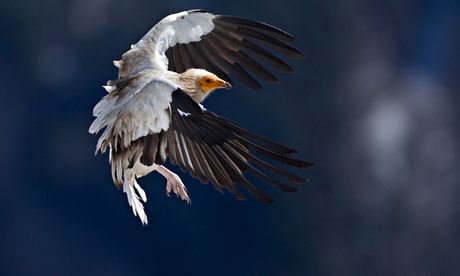 The Egyptian vulture (Neophron percnopterus) is one of only three European species on the list. Photograph: AlamyOnly three of the 100 Edge species are found in Europe. The Egyptian vulture (Neophron percnopterus), ranked at number 30, is found from the Ukraine, south throughout the Balkans to Greece and Turkey, but is threatened by poisoning, poaching, electrocution and human disturbance. At number 49, the sociable lapwing (Vanellus gregarius) has been found in Armenia, Turkey and Ukraine – and once in Essex – while the slender-billed curlew (Numenius tenuirostris) breeds in Russia and spends the winter in several eastern European countries.

At number 11, the spoonbilled sandpiper (Eurynorhynchus pygmeus) has become a temporary resident of the UK, with a captive breeding population of 25 birds at the WWT Slimbridge reserve in Gloucestershire. Eggs from the birds will eventually be taken back to the Arctic in a bid to rebuild the rapidly declining wild population.

The top 100 Edge birds are found in more than 170 countries. The list includes species from 22 of the 29 living orders of birds, with 18% made up of Passeriformes, more commonly known as perching birds. Twelve of the top 100 species belong to the family Charadriiformes (sandpipers), 11 from the family Accipitridae, which includes eagles, hawks and kites, and eight from the family Columbiformes (doves and pigeons). 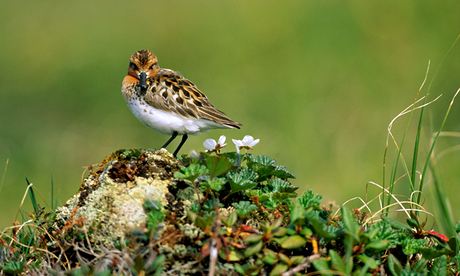 At number 11, the spoonbilled sandpiper (Eurynorhynchus pygmeus), was a one-time resident of the UK after 13 young birds were flown over for captive breeding. iPhotograph: Chris Schenk/CorbisSixty-four per cent of the top 100 species are country endemic, meaning they are found nowhere else in the world. India has the highest number of Edge birds with 14 species, while the Philippines has the highest number of endemic Edge birds at nine species.

The study, “Distribution and conservation of global evolutionary distinctness in birds”, published on Thursday in the journal Current Biology, found that species representing the most evolutionary history over the smallest area as well as some of the most threatened distinct species are often found far from places that are species-rich or already on the conservation radar.

Lead author Prof Walter Jetz from Yale University and Imperial College London, said: “By identifying these top 100 species, we can now focus our efforts on targeted conservation action and better monitoring to help ensure that they are still here for future generations to come. As we show, conservation priorities can be adjusted to better conserve the avian tree of life and the many important functions it provides.”

The world’s 100 most unique and endangered birds