State wildlife officials announced Tuesday that a rare seasonal outbreak of West Nile virus is to blame for the recent spike in deaths of iconic bald eagles across northern Utah.

The Utah Division of Wildlife Resources said in a report that laboratory results confirmed that the virus was responsible for the deaths of 27 bald eagles over the past few weeks.

Officials were not certain how the eagles contracted the virus, but said they believe they may have been exposed by consuming infected eared grebes, a member of the grebe family of water birds, that recently died on Great Salt Lake. The disease usually affects birds during warmer months, when the mosquitoes that carry it are active, according to the report.

“So this is an unusual time to document West Nile viruses because it’s cold and we don’t have mosquitoes circulating,” McFarlane said, calling the winter outbreak “pretty rare.”

McFarlane said that in winter, bald eagles obtain most of their food by eating dead animals. Since all of the dead eagles had been within flying distance of the lake, that led to the hypothesis that the eagles could have contracted West Nile virus after eating grebes that died at the lake from the same disease. Testing of the grebes is ongoing, she said.

Leslie McFarlane, of the Utah Division of Wildlife Resources, explains how the bald eagles likely contracted the virus from a population of infected birds.

The report said testing of the eagles at the Utah Veterinary Diagnostic Laboratory in Logan, Utah, and the National Wildlife Health Center in Madison, Wis., “definitively ruled out many other possible causes of death,” including toxic chemicals or poisons, lead poisoning, bacterial infection and other viruses.

McFarlane told NBC News that the DWR currently knows of 27 bald eagles that have died from the disease, with five others being treated using supportive care for West Nile.

Due to the nature of the outbreak and the fact that not all of the birds died at the same time, McFarlane said it took about a month to fully determine what caused the deaths.

She added that between 750 to 1,200 bald eagles visit Utah in winter and the deaths have not had a major impact on their population.

“We don’t think that this outbreak is going to affect the local population negatively,” she said, adding that she did not believe it would affect the national population either.

JoDee Baker, epidemiologist with the Utah Department of Health, said in the DWR report people do not need to be concerned about the outbreak, as the dead grebes and dead eagles do not pose a risk to people.

“People become infected with West Nile virus after being bitten by a mosquito that carries the virus,” Baker says. “Since the mosquitoes that transmit West Nile virus aren’t active in the winter, there’s no risk to the public’s health.”

Deaths of at least 20 bald eagles in northern and central Utah in recent weeks worry scientists, who are struggling to find the cause. 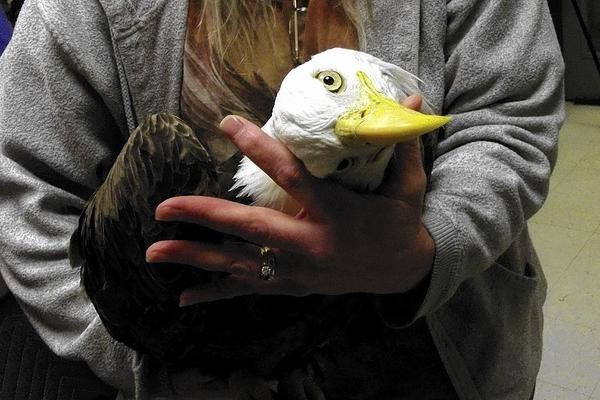 SALT LAKE CITY — Buz Marthaler felt the once-proud aerial predator fall limp in his arms, and the veteran animal caretaker knew he was facing a mystery unlike any in his career.

Bald eagles are dying in Utah — 20 in the last few weeks alone — and nobody can figure out why.

Hundreds of the majestic birds — many with wing spans of 7 feet or more — migrate here each winter, gathering along the Great Salt Lake and feasting on carp and other fish that swim in the nearby freshwater bays.

Earlier this month, however, hunters and farmers across five counties in northern and central Utah began finding the normally skittish raptors lying, listless, on the ground. Many suffered from seizures, head tremors and paralysis in the legs, feet and wings.

Several of the ailing birds were taken to the mammoth Wildlife Rehabilitation Center of Northern Utah, where Marthaler and other handlers tried to save them. Within 48 hours most were dead.

“It’s just hard to have your national bird in your arms, going through seizures in a way it can’t control — when you can see it’s in pain but don’t know what’s happening to it,” said Marthaler, 56, co-founder of the facility in Ogden.

“As a human being, you just have problems with that,” he said. “And when you lose one, it just grabs your heart.”

State wildlife specialists are also baffled. For weeks, officials have sent birds to the National Wildlife Health Center in Madison, Wis., for necropsies, hoping the results would offer clues.

They began to rule out obvious possibilities: The birds were not shot by hunters, and officials don’t believe the birds were poisoned. “There doesn’t seem to be anything suspicious in that regard,” said Mitch Lane, a conservation officer with the Utah Division of Wildlife Resources, who has responded to numerous reports of downed or sick eagles.

At first, the agency’s disease scientists guessed that the illness could be encephalitis, which is caused by the West Nile virus, but later ruled out that possibility. And although many sick eagles tested positive for lead, researchers did not think that it was killing the birds.

Officials suggest the eagle die-off is possibly connected to the deaths of thousands of eared grebes that began in Utah in November. Eagles are known to prey on the small shore birds. Because the grebes are thought to have died from avian cholera, many scientists theorize that the eagles became sick from eating infected grebes. Officials still don’t know why the shorebirds became sick.

“We’re getting closer to an answer,” Lane said, adding that officials would meet this week to continue investigating the mystery.

Scott Isaacson, 59, an attorney who lives in the town of Farmington, said he was feeding his chickens one night this month when he spotted an eagle on the ground under a cottonwood tree where he was used to seeing seven or eight birds perched in the branches. “I’ve never seen one on the ground,” he said.

He called wildlife officials, who told him to approach the bird; if it was healthy, it would fly off. The bird skittered into a nearby pond.

“It was really sad to see this graceful creature, with its beautiful white head, its wings spread out in the water,” he said.

Wildlife officials later nabbed the bird, which was hissing and clawing as it was scooped up in a net.

Bald eagles were removed from the endangered species list in 2007. Utah officials say 700 to 1,200 winter here each year. “Everybody here loves the eagles,” Isaacson said. “Our school is named Eagle Bay Elementary and our church is the Eagle Shore Church.”

Many sick eagles were brought to Marthaler’s facility in dog carriers. Workers handled them with Kevlar-lined gloves to avoid being sliced by the powerful talons.

“In an average year, we might get one or two, but we’ve received nine so far, and five of those have died,” Marthaler said. “The other four are still in our care.”

Some days have been especially hard on the staff. “Every bird would come in more paralyzed than the one before it,” Marthaler said. “They couldn’t move their legs. Their wings were weak. Their heads would jerk with tremors. It was difficult to watch.”

The retired Air Force member says it’s often difficult to determine the ages of adult eagles. “With their plumage, they can be 5 or 20; it’s hard to tell,” he said.

Officials at the Wildlife Rehabilitation Center have their own theories about the sickness. Some point to radiation from Japan after the 2011 meltdown at the Fukushima Daiichi nuclear power plant. “We aren’t ruling out anything,” Marthaler said. A call from Idaho shed new light: A wildlife official said bald eagles there were also getting sick, suggesting that the birds were arriving in Utah already in bad heath.

The most recent eagle to arrive with Marthaler was a juvenile. “He was in the worst condition of all of them,” he said. “He wasn’t even able to stand. When we left for the night, he was lying down and you had to look close to see if he was still breathing.”

The next morning, the bird was standing again. “He’s still with us,” Marthaler said. “And that gives us a bit of hope.”