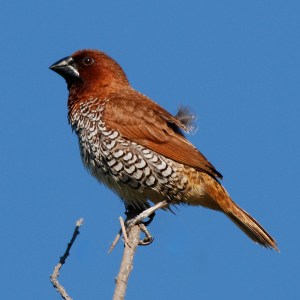 Nutmeg Mannikins have been present in southern California since at least 1988, and were considered common in Los Angeles and Orange counties by 1997–1999, when the population was studied by Scott Smithson as part of his master’s thesis at California State University at Long Beach. The population ranges from San Luis Obispo County south into extreme northwestern Baja California, Mexico. The overall size of the California population is thought to number in the several thousands of individuals. A summing of the highest eBird counts for each geographical cluster of reports during August–November 2011 totaled 1,399 individuals, according to an analysis by Brian Sullivan and Kimball Garrett.

The Nutmeg Mannikin is a “polytypic” species (meaning it has multiple named subspecies) that is widespread from northeastern Pakistan through the Indian subcontinent and Indochina to southeastern China, Indonesia, and the Philippines. Because of its popularity as a cagebird, exotic populations are known from many regions, including Australia, California, Hawaii, Jamaica, Japan, and Puerto Rico. In most regions of the world, it is known as the Scaly-breasted Munia. Because the American Ornithologists’ Union area for North and Middle America includes Hawaii, the Nutmeg Mannikin is already on the AOU Check-list. As such, its English name and taxonomic placement are automatically accepted by the ABA CLC. However, a proposal to the AOU to change the English name to Scaly-breasted Munia may be forthcoming. 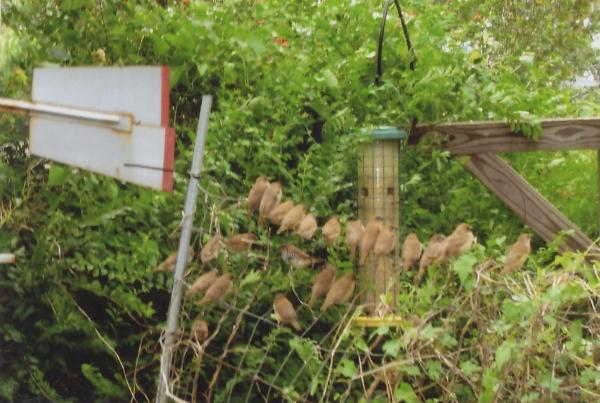 This flock of Nutmeg Mannikins was photographed in June 2005 in Pensacola, Florida. Photo by © Vernon Gibb.

Given the presence of Nutmeg Mannikins elsewhere in the ABA Area (for example, small to moderate populations are found in the San Francisco Bay, Houston, Pensacola, and Miami areas, and escapees can be found virtually anywhere), some may wonder about the “countability” of mannikins outside southern California. According to Rule 2(B)(iii) of the the ABA Recording Rules and Interpretations, “an introduced species may be counted only where and when it meets the ABA Checklist’s definition for being an established population. An introduced species observed well away from the accepted geographic area is not counted if it is more likely to be a local escape or release rather than an individual straying from the distant population.”

The ABA CLC developed eight criteria for defining when an exotic population can be considered established. These criteria were published in 2008 in the seventh edition of the ABA Checklist, and are provided online by the ABA. Note that all eight criteria must be met for an exotic population to be considered by the CLC to be established. Currently, only the Nutmeg Mannikin population occurring in California from San Luis Obispo County south to the Mexican border meets the CLC’s definition of an established population and is thereby “countable” on lists submitted to ABA.