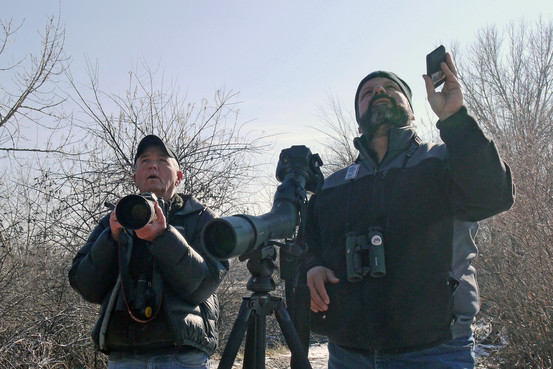 As Christopher Vogel approached a hot spot for Louisiana waterthrushes in a New Jersey state forest one spring day, the professional ornithologist could hear the bird’s complex crescendo of “CHEE-CHEE-CHEE-titi-WEE.”

But something didn’t seem quite right.

Then he spotted the trouble. The warble wasn’t coming from a bird. Rather, he said, a large man in full birding regalia—khaki field vest, floppy sun hat and expensive binoculars—was standing there on a bridge, his iPhone chirping away. It was loudly playing the bird’s song, seemingly on a loop, in an effort to lure the bird into view.

“He thought he was alone. He was being on the sly,” recalled Mr. Vogel, 41 years old. “And then somebody caught him.”

“I told him, ‘You know that’s exactly what you’re not supposed to be doing.’ ” Mr. Vogel then snapped a photo of the man and threatened to post it online for public shaming. The birder blanched, said nothing, went back to his car and left.

An otherwise peaceful pastime has been roiled by conflict as digital field guides, and the song recordings they include, have made birding easily accessible for anyone with a smartphone and, sometimes, a portable speaker. In a hobby where reward has come from years of quietly, patiently waiting outdoors and diligently studying technical tomes, there is deep resentment of birders who are relying on these easy-to-use—or abuse—apps.

The dispute has sparked spats in the field and email wars in the birding community. The American Birding Association, a group that caters to recreational birders, is considering a major revision to its oft-cited Code of Birding Ethics to address smartphone use. It currently suggests birders “limit the use of recordings” to attract birds and never use the methods on rare birds or at popular sites. One proposal is to “discourage” their use and turn to playback only for research purposes.

“With an iPod or a smartphone, anybody can play and play and play and play anything they want,” said Geoffrey LeBaron, director of the National Audubon Society’s annual Christmas Bird Count, an avian census, now in its 114th year, that runs through Jan. 5. “It’s changing the game.”

Those who use the so-called playback maintain that judicious use of the apps is acceptable. On nature walks, they say, its use can be a less disruptive way to bring a bird into view, or elicit an audible response, rather than sending everyone thrashing through the thicket, possibly disrupting the birds’ natural habitat. Moreover, they say, the use of audio isn’t new in the birding world. Research scientists have long used playback methods with cassette tapes, and “pishing,” or replicating a bird call, is a common practice.

While the use of these apps has sparked ire among traditionalists, professional birding organizations have been trying to find a middle ground. They want to harness the technology and its possibilities—even the Audubon Society has an app, featuring identification details for more than 800 species and eight hours of bird songs—but they want to make sure the technique is used with care.

David Sibley, author of five birding field guides and a respected authority in the community, has been wrestling with how to find balance. His guides are also offered as apps, complete with bird songs.

“You get something out of it because you get to see the birds up close and you’re interacting with them, even though it’s a sort of appeasing trickery that you’re doing,” Mr. Sibley said. “But at the same time—what if everybody does that? It would have some really negative impacts on the birds.”

Mr. Sibley’s guidelines are that birders should choose a particular spot and target, offer only 30 seconds of sound with a pause between snippets, and be subtle. Another tip: “Never use playback in a situation where another birder might hear you, unless you have his permission.”

The National Audubon Society, meanwhile, is developing a comprehensive policy that goes beyond the current, brief “attractant noise” guidelines for its Bird Count. The group anticipates more than 70,000 participants in the current three-week event, and observers are allowed to use “very judicious” playback, but never in a way that would affect a bird’s behavior “in any significant way.”

One concern is the effect of the calls on the bird. Some say it can get stressed if it thinks the playback is a territorial threat. A predator may even be lying in wait. The bird could also leave its habitat or stop responding to the calls, realities scientists say make them nervous.

“The I-gadgets are incredibly dangerous to people who know nothing about birds,” said avid birder Heidi Trudell, 28, who doesn’t have a smartphone. “It’s just a really slippery slope that I’m not comfortable with.”

No matter, Ms. Trudell replied. The National Park Service prohibits the use of bird call apps on its property, considering it an “intentional disturbance” to bird behavior and biology, according to a spokesman.

Adding to the tension is that neither side can point with certainty to scientific evidence supporting their position, as the smartphone debate is so new. In a study published in October in the journal PLOS ONE, Princeton University ornithologist Berton Harris, focusing on wrens in Ecuador, concluded frequent, regular playback “may have minor effects on wren behavior.” The birds eventually stopped responding, and Dr. Harris said the next phase of his research will be to study nesting success to better understand if playback is harmful.

The biggest problem, said Jeffrey Gordon, president of the American Birding Association, is when playback is used thoughtlessly.

“I find it so boorish when people are just out here, indiscriminately blasting stuff,” said Mr. Gordon, who uses an app, but says he does so judiciously. “When we’re getting out, we’re trying to become more attentive to what’s around us, and playback—or any kind of overreliance on gadgetry—can quickly start to erode the experience.”

Write to Sarah Portlock at sarah.portlock@wsj.com

Corrections & Amplifications
The photo with this article was taken by Bill Schmoker. The credit with an earlier version of this article incorrectly said Jeffrey Gordon, who was in the photo and provided a copy.