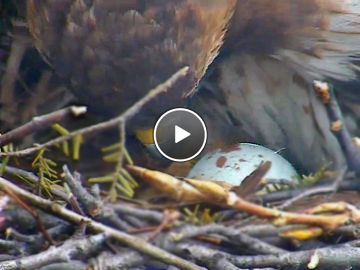 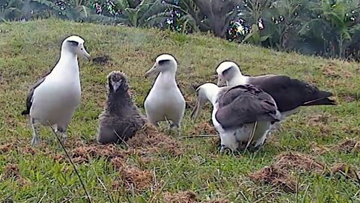 In addition to the hawk, heron, and FeederWatch cams this year we have the new Kauai Laysan Albatross cam. Watch as the nearly two-month-old youngster explores its surroundings and interacts with its parents and other nonbreeding albatrosses.

The return of Sapsucker Woods’ Great Blue Herons is right around the corner, and we are preparing to install new HD cameras donated by Axis Communications on the nesting snag soon. Assuming the herons return, we expect the live chat to open sometime following the arrival of the male heron. In past years that has been as early as mid-March, but with the ice still thick on the pond, it may be as late as early April before he turns up and sticks around. Stay tuned for more details.

Watch behind-the-scenes to see how Cornell Lab cinematographer Gerrit Vyn captures footage of fall migration on the coast of China, along the vitally important East Asian-Australasian Flyway. These nature moments are produced especially for Lab members like you.