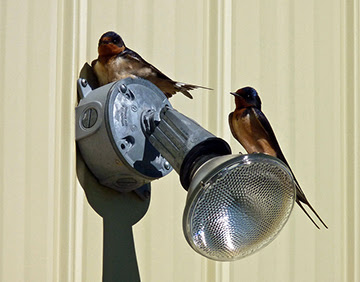 Researchers will study the effects of artificial light on the pace of life. Barn Swallows by Anne Elliott via Birdshare.

We live in an incredibly well-lit world. All that wattage in heavily-populated areas creates a halo glow that brightens the night sky. Researchers at the Cornell Lab of Ornithology,Syracuse University, and Globe at Night are seeking participants for a unique new study. Scientists want to know what impact all that extra night light might have on the circadian rhythms of life using Barn Swallows as their subjects. Barn Swallows have adapted to live near humans and nest almost exclusively on structures such as bridges, homes, and yes, barns. Volunteers can sign up throughNestWatch.

“Specifically, we’re hoping to learn if the artificial light has an effect—good or bad—on what we call the ‘pace of life,’” says Cornell Lab of Ornithology researcher Caren Cooper. “It’s been established that creatures that live in areas where daytime is shorter during breeding, such as the tropics, have a lower metabolism and a longer life span. On the flip side, animals that breed where there is more daylight tend to have a faster metabolism and shorter life. Is the pace of life for Barn Swallows increasing if they live in areas where the days seem even longer due to artificial lights?”

“Previous studies have shown that birds living in areas with artificial light at night start singing well before dawn, start eating earlier, eat more during the day, and have more complex social interactions,” says researcher Margaret Voss at Syracuse University. “Expanding those activities takes its toll in energy use. We want to learn how that might play out when it comes to health and survival as the Barn Swallows build nests and raise their chicks.”

If Barn Swallows nest near you, get involved in the Barn Swallow project. Sign up to learn more about how the study is being carried out through NestWatch and Globe at Night. 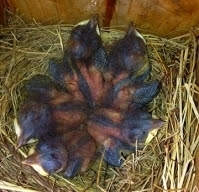 It started as a curious observation: NestWatcher Gerald Clark noticed an oddly large egg among the clutch of four in the bluebird box he was monitoring last summer near his home in State College, Pennsylvania. When he went back to check the nest box in early July, there were five bluebird chicks—including two smaller-sized nestlings, which presumably came from the same egg. In other words, twins. Twinning is very rare in the bird world (fewer than half of 1% of waterfowl eggs in one study contained twins), but it’s never been observed in bluebirds before.

Clark’s find was so notable it was written up and published in the scientific journal PeerJ, in a paper co-authored by Clark and NestWatch project leader Robyn Bailey. The paper is available online, and Robyn will share more details about the story at the Bluebird Society of Pennsylvania Conference on March 29 in State College.